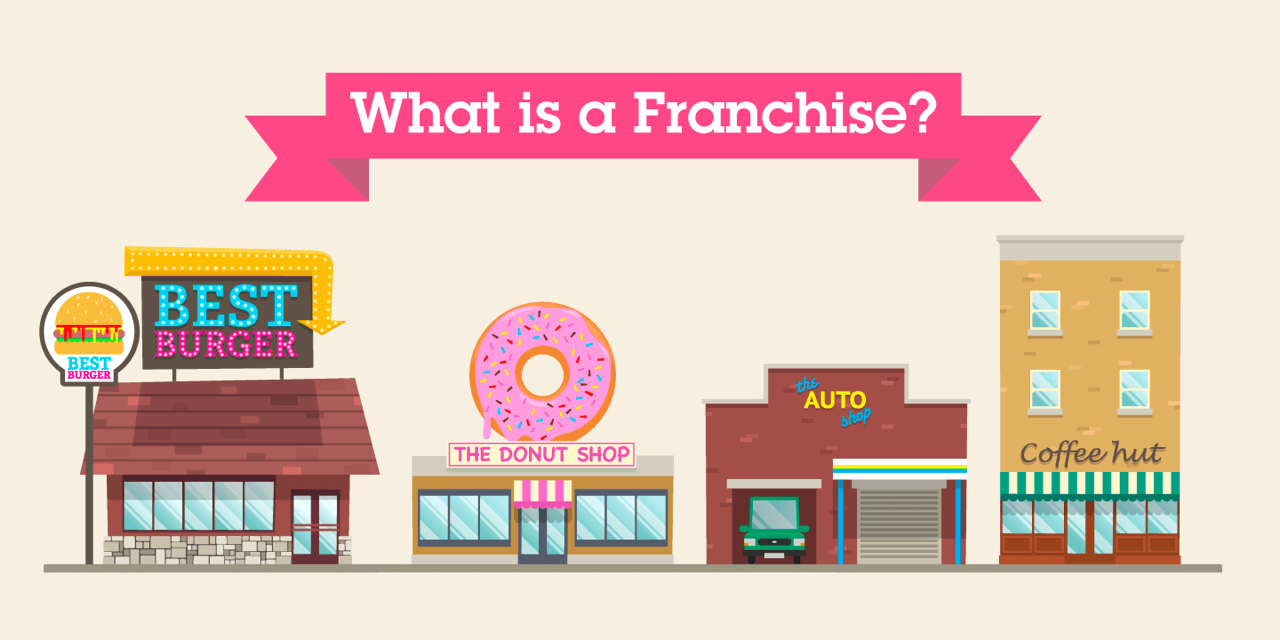 If you’re looking for a business opportunity which allows you to jump on board with an established brand and work to a tried and tested formula, a franchise could be the perfect solution for you. There are all kinds of business opportunities out there online, most of which start with something along the lines of ‘Make £724 an hour from your front room’. Guess what? It’s all a big scam. But there are some genuine opportunities to become your own boss if you know what to look for.

Many of the well known shops and restaurants you see on your local high street are actually franchises. Despite the fact that they have a well known brand name above the door, like Domino’s or McDonald’s, they are actually businesses owned by private individuals. A franchise business is a simply a method of expanding a business and distributing the goods or services it produces more widely. The owners of the business, ‘the franchisors’, sell the rights to the business logo, name and business model to an independent, third party operator known as ‘the franchisee’. The franchisor not only specifies the products and services the franchisee is able to sell, but also provides them with an operating system, equipment, training and supplies. The result is a string of privately owned businesses that all operate in exactly the same way. 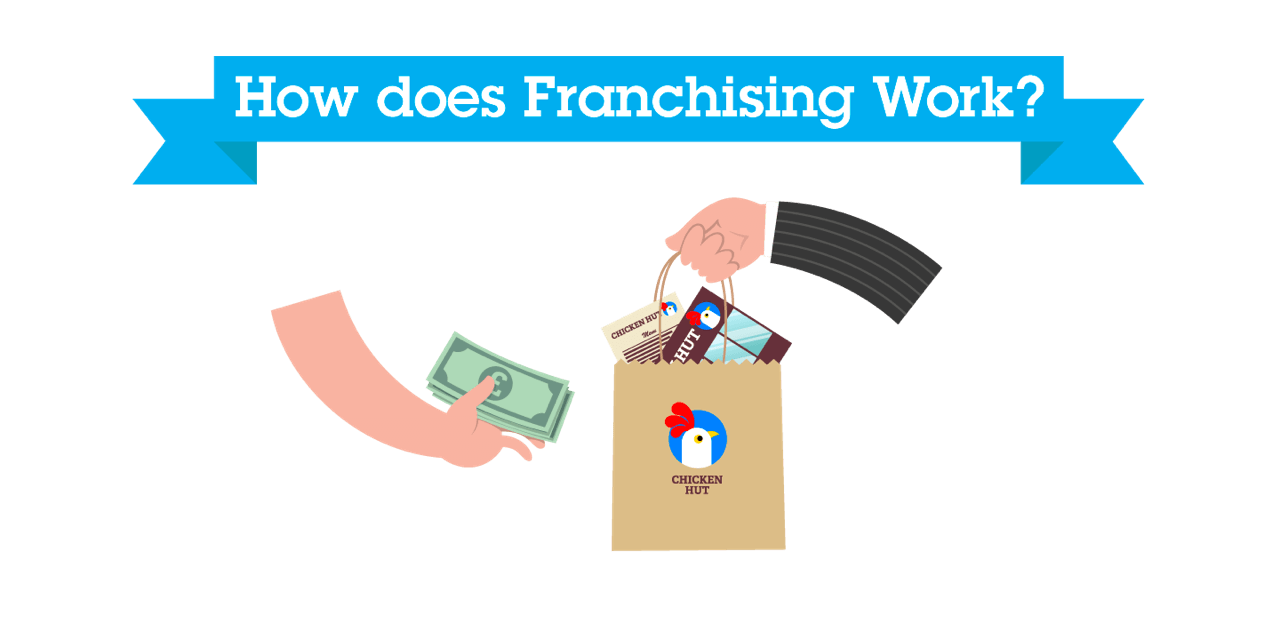 The franchisee will pay an initial upfront fee for the right to do business under the trade name of the franchisor. This sum will also include all the training and equipment the franchisee needs to be able to deliver exactly the same products and services as the parent business. That is why every Domino’s Pizza (this is not an advert by the way) will taste exactly the same wherever you go, despite the fact that each restaurant will be owned by an independent third party.

Once the franchisee begins to trade, it will also pay an ongoing royalty payment, which could be on a monthly, quarterly or annual basis. This payment will usually be a percentage of the franchisee’s revenue.

Most franchising deals will include:

The shop, restaurant, or alternative business, will always be an exact replica of the parent business to keep the brand consistent. This means that the franchisee will not have as much control over the business as they would if they set up on their own enterprise. However, they will have the added security of investing in an established brand and a formula that has been proven to be successful.

Control of a franchise is generally quite strict, and will include everything from the staff uniforms to the marketing literature that appears in the store. In most cases, the pricing will also be standardised across all franchises to keep the brand’s advertising and promotions streamlined and consistent. Once all the training has been completed, the franchisee will be responsible for the day-to-day running of the business and will make or lose money based on its individual performance. 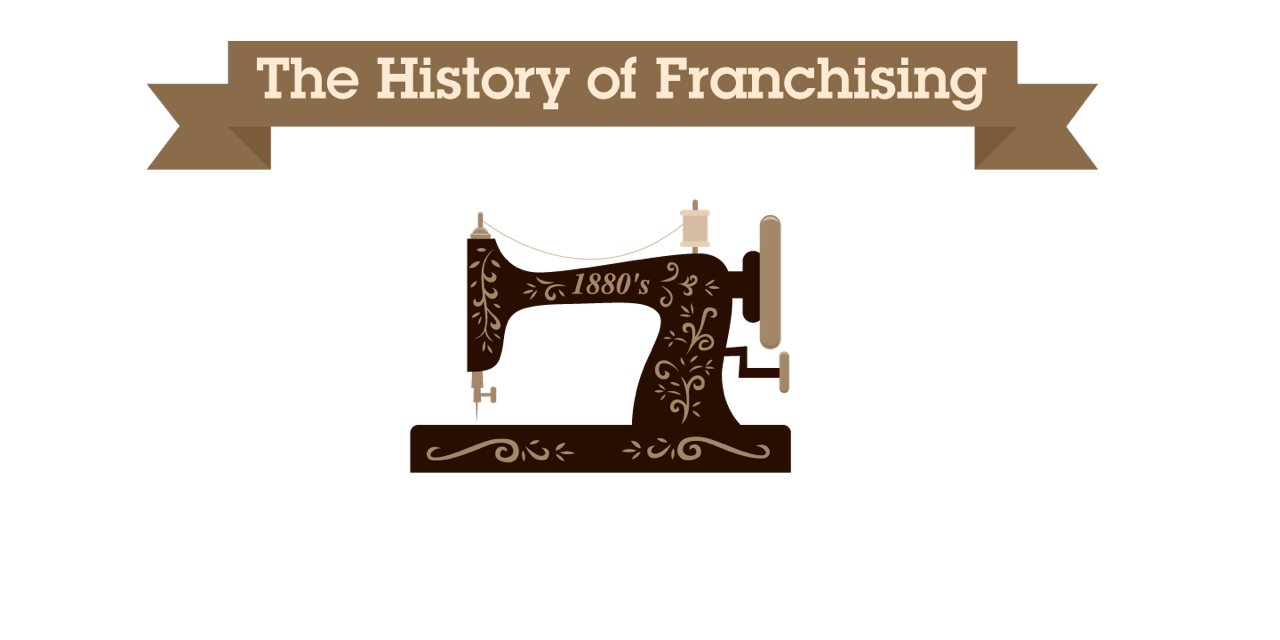 Believe it or not, the very first example of franchising dates all the way back to the Middle Ages, when local governments granted high church officials (and other important folk) a license to maintain order and collect taxes on their behalf. These important individuals could also hold markets, and perform business related activities, as long as they paid money, for protection among other things, to the lords. This ‘protection’ essentially ensured that no one else could set up a commercial venture in the same territory.

Next, we jump to colonial times, when what were known as ‘Franchise Kings’ would authorise individuals to run local markets and hold fairs on their behalf. These franchising rights were bestowed upon local citizens who agreed to take on the risk of moving to a new area and establishing a new colony. Their reward for taking on the risk of creating a new colony was a share of the spoils from their commercial ventures, while the crown would benefit from extra taxes and royalties.

The first example of the modern day franchising model came to light in the 1880s, and was created to boost the sales of the Singer sewing machine. Isaac Singer invented a sewing machine which was far superior to anything available at the time. To improve the distribution of a product American people were desperate to own, Mr Singer found businesspeople who were interested in owning the rights to sell his sewing machines in specific geographic areas. He then charged these individuals an upfront licensing fee for the right to sell the machines. Singer gave the licensees training so they could teach their customers how the sewing machines should be used. He then stepped up the production of his sewing machines on the back of the money coming in from licensees.

Probably the world’s most well known franchise came along in the 1960s, when Ray Kroc, a travelling milkshake salesman with a vision, heard about two brothers from California, Dick and Mac McDonald, who owned a restaurant which produced its food on an assembly line-like system. Mr Kroc saw the potential for similar restaurants to operate right across the country and started to sell the franchises.

Today there are 34,000 McDonald’s restaurants around the world, give or take the odd one, and that assembly line method of producing the food is the reason you’ll eat the same burger in a retail park in Hull, as you will in Leicester Square.

There are three basic franchise types in operation today:

The franchise business model is not for everyone. There are plenty of limitations as well as benefits associated with this approach. Undoubtedly the biggest drawback for many is the lack of control, while the main advantage is probably the reassurance of buying into a business that is proven to work. Let’s take a closer look

If you’ve weighed up the pros and cons of franchising and feel that this is the right business choice for you, it’s time to start doing your homework. With many franchisers out there clamouring for attention, identifying the franchise which will suit you and earn you the best returns can be difficult. After all, if you’re going to make a success of your franchise, it will be a long term investment. You need to choose a franchise with real ongoing potential, and a franchisor you can build a strong, productive relationship with.

Of course, there are no guarantees in the world of business. And, while franchises do have a high success rate compared to fledgling independent businesses, if you choose the wrong opportunity, you could find yourself with a flop on your hands – and nothing to show for it. That’s why it’s so essential that you take time to research your options, speak to lots of different franchises, talk to lots of successful franchisees and get a real feel for the franchise market in your chosen niche.

At the end of the day, there’s no foolproof way to select a winning franchise. The most promising opportunities can go awry, or seemingly hopeless franchises can turn to gold in the right hands. However, if you undertake rigorous research and careful assessment of the market and your shortlist of opportunities, you can heighten your chances of success. Here are a few essentials to consider when you make your assessment…

The process that will take you from selecting a franchising opportunity to becoming a proud franchisee will vary widely from franchise to franchise. Often these processes can be long and complex, with lots of legal and financial hoops to jump through before your franchisor “hands over the keys”.

There are, however, a few steps which are common to most of these transactions (although not all). We’ll pick up the process at that crucial point after you’ve decided you want to go ahead…

How to buy a franchise in the US and Canada

Just as in the UK, the process of acquiring a franchise will differ from franchise to franchise, state to state in both the US and Canada. As above, there are a few common steps you can expect to go through including financial checks, deposit agreements and franchise agreements. Make certain your prospective franchisor explains their particular process to you in the early interview stages to ensure you have a clear roadmap and time-scale before you get started.

There’s an arm’s length list of questions any responsible aspiring franchisee should ask their franchisor before investing and signing on the dotted line. These are the questions we will leave you with as they should be at the front of your mind before entering into any negotiations or discussions with a franchisor. Good luck

We asked some of the franchise industry’s top experts what their ultimate tip for a new franchisee would be. Here are their answers:

For me it all comes down to the passion. You could have a great company, great system, great training, but if you don’t have a passion for what you’re selling it’s never going to work. You can overcome obstacles if you really believe in what you’re selling.

Follow the model. You’ve bought into a system for a reason. And if you need any help don’t be afraid to call your franchise manager.

Perform comparative research of franchise opportunities. A prospective franchisee may already be mentally favouring a particular franchise. Just like with any other investment, you need to perform in-depth research, considering and comparing the different franchise opportunities on offer before making a decision. Don’t be afraid to ask the franchisor for additional information to complete your research.

Don’t put too much of your energy into studying the legal documents you get as part of your franchise introduction package. Let an experienced franchise attorney go through them with you. Put your energy towards talking with existing franchisees, instead. You’ll get the real scoop on the franchise opportunity you’re thinking of purchasing.

Check the company out at Companies House – it is well worth a small fee to find out the current status of the company. Anyone can create a flash web site so they look big but registered company accounts will tell you the condition of the company and what shape it is in.

Want To Become A Tubz Partner?

If you would like to become a valued member of the Tubz Partnership simply contact us by phone to discuss your business needs. Our friendly customer service team will ensure you get a tailor made business package, hassle free and guaranteed to start earning you cash from day one.

Our franchise opportunity's are fully comprehensive and supported by over 15 years of experience and success in the vending Industry. Tubz have over three hundred franchisees all over the world including Australia, Canada, Europe and the USA currently benefitting from this winning formula and we continue to grow each year!

Every Tubz Franchisee is assigned a dedicated customer service manager who is there to help provide additional support and advice as needed from the very start. Investing in a Tubz Franchise business means that you will be going onto business for yourself but not by yourself. We will be with you every step of the way…..

Phone us now on 01795 414 480 for and informal chat and we will answer any questions you may have about our services or products. You can also visit our main licensed operator website at www.tubzbrands.co.uk. 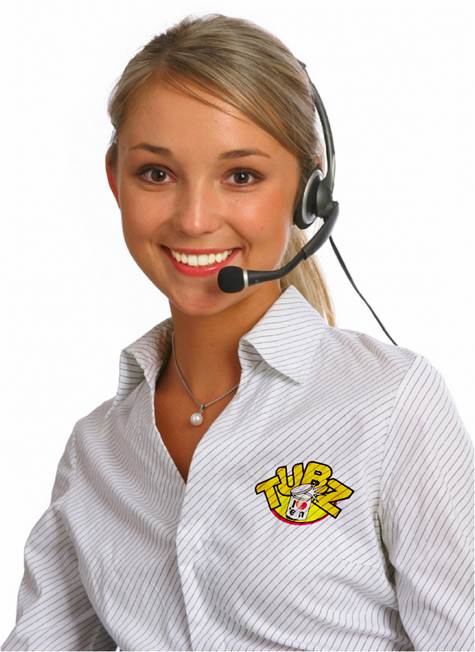 "We use your personal information to provide the services you're requested (i.e. process your order). We may also use the information for auditing research and analysis to operate and improve out technologies and services. We will not pass your details on to any third parties"